Laura Bell Bundy
ummm…gag? Are we not getting enough attention at home? This isn’t the MTV movie awards. The thing is she’s actually normally really cute.

Martina McBride
She looks gorgeous, but why would you wear a pants suit to an awards ceremony this big if you aren’t 60?

Jennifer Nettles (from Sugarland)
Beautiful. I love this dress. Simple, but has a touch of embellishment. She looks really pretty. Up close, her makeup is perfect.

Lady Antebellum
I really love them right now. And if you haven’t seen them in concert you should. I want to go again when they come to SLC in Feb. I like the outfits. She looks classy.

Little Big Town (and Lionel Richie)
The guys look fine, but I’m not loving either of the dresses. The one looks like a 70s disco ball or something, and the other I just don’t like the pattern. Also, I know the fro is your thing, but straighten it once…just once.

Reba McEntire
Umm not a huge fan of the dress, but I think for her she looks pretty good. It’s like green velvet or something though? I used to wear that for Christmas when I was 5.

Taylor Swift
My Girl. I always love her. To be honest though, I thought her dress was a little bit boring, but it was nice to see her in something other than glitter. Not that I don’t love sequins, I’m pretty much obsessed. I do like the train thing, just wish it was a brighter color or something. Maybe royal blue? I don’t think she’s done that before. 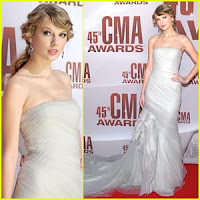 Tim McGraw and Faith Hill
The couple of all country couples.
Flawless.
She looks so amazing, and Tim is Tim. He is hot. I love her dress. LOVE.

Miranda Lambert
She doesn’t look the best she ever has, but I like this dress (and wait til you see her next outfit choice).

I do love this picture of her and Blake though, because they look so in love and it’s so cute.

This is the outfit I was taking about….it’s not cute. I don’t like the color, or the design, or anything about it. Also her hair doesn’t look done at all. And this is when she was winning female vocalist of the year. Try harder! I used to love you so much!

Kenny Chesney and Grace Potter won for ‘You and Tequila’, which happens to be a song I love. I think she looks so cute, but I think he could have done better than a t-shirt.

The Band Perry
Love them…except I think they wont too many awards for the one song they have. I think Taylor and Zac Brown were robbed.
Anyway, I like the oufits, but they need to get that hair under control. What in the world? Hers is always just crazy, and both of her outfits would have looked so much more put together if her hair was. I do love both of her dresses though. Good picks.

LOVE this dress. (but the hair!) 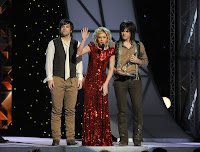 ENTERTAINER OF THE YEAR! AGAIN!
yay! love her!