September 27, 2011
The Emmys
I’m back to judging people’s outfits…Isn’t it just so much fun?
Lea Michele
I liked the dress, especially from the back, but her hair would have looked better up. Then you would have been able to see the shoulders and the low back better.

Gwyneth Paltrow
This is a weird outfit to me, but she always looks good, and I think she looks better than the people that I picked for worst dressed. She’s still pulling it off. 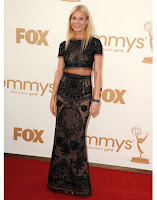 Kerry Washington
I LOVE this dress. So pretty. But I don’t know if I love her plain hair, and something about her makeup isn’t making me love the whole look. 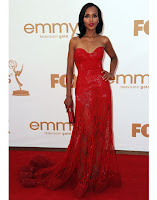 Kristen Wigg
I think she looks the best I’ve seen her look, but its not my favorite color dress. She looks so tiny. 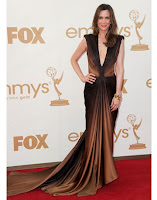 Kate Winslet
Same thing as Kerry Washington….the dress looks really good on her, but there is just something about the whole look that I’m not in love with.

Minka Kelly
I love the color and the lace of the dress, it’s just not something that I would picture for the Emmy’s. She looks gorgeous though. 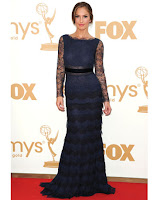 Naya Rivera
She looks beautiful, but the dress doesn’t stand out. I do like the neckline.

Paula Abul
I think she looks really good for her. The dress looks good too, but apparently she walked around all night with it on crooked…does that surprise anybody?

Sophia Vergara
I think she is so beautiful. I almost put her in best dressed, but I decided to only pick five so I didn’t…I love the color of the dress. Not quite red like everyone else’s that night. Looks great on her.

Worst Dressed
Zooey Deschanel
She looks like she is 5 years old or something. And I hate that color and the sash across the middle. Just not a good choice all around. 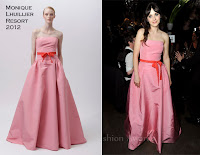 Katie Holmes
The color is really pretty, but it doesn’t look like it fits her and it is really boring and casual. Also her hair looks like she threw it up at that last second and there are tons of flyaways. She can do a lot better.

Claire Danes
I just don’t understand this pattern at all. 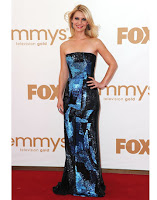 Christina Hendricks
I just think this dress makes her look pale and big…also is had this big slit and it did not look good at all.

Dianna Agron
This dress looks like something a 60 year old should be wearing.

Best Dressed
Emily Blunt
Love this dress. It’s very different. I like the textures and think the color looks pretty on her. She’s so cute.

Cat Deeley
I think she looks really good in this picture and this dress is so pretty. Kind of reminds me of Taylor Swift. 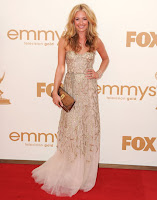 Julia Stiles
I haven’t seen her for a while, but she looks amazing and I’m obsessed with this dress. I think I would pick this one or Nina Dobrev’s below if I was going to wear one. It makes her look so good.

Heidi Klum
When does she not look good? Such a fun dress.

Kristin’s Photoaday – End of July to the Start of August