April 27, 2011
So…I recently went mountain biking in Moab. It was basically the first time I have REALLY been mountain biking and the first time I had been to Moab. I will get to my biking experience in a minute…but first off let me just say that Moab is beautiful. It is was so fun, other than the weather. (It was mostly cloudy and cold, and the second day was pouring rain, but you make the best of it right?) The picture below is just one I found online (I will post some later, I need to get some from my friend), but you can see the redrock and get an idea of what it looks like. There are tons of trails to hike on or bike, there are caves to explore, you can go rock climbing/repelling, etc. The weekend we went was “Jeep Safari” Weekend, so we went and watched all the crazy people with their huge jeeps and crawlers, and watched them do their rock crawling. My friend, Chad, also took us up in his Jeep and did a little bit ourselves. It was pretty fun and totally scary! Haha. 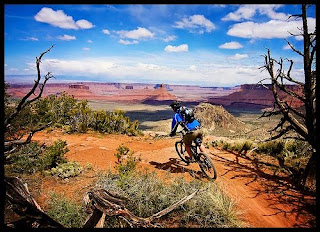 So onto my mountain biking story…We all decided to rent bikes and go for a ride. At first they all wanted to go out to “Slick Rock” which is really hard and I was like ummm I might die…and the fact that I haven’t ever really gone before combined with the lady at the bike store telling me that they commonly call that trail the “Breakup Trail” because guys try to take their girlfriends or wives on it and it’s way too hard, and telling me about all of the elements of the trail that I would have no idea how to handle was pretty much making me want to pee my pants…SO finally we decided not to do that one. Thank Goodness! We went to another one, which actually wasn’t too bad and I thought was really fun. We all went on the first trail and then split off so the guys could do a harder trail. Chad was a sweetheart and took Brit, Kami, and I on an easier one so that we wouldn’t seriously injure ourselves, but I still ate it about 3 pretty good times. Needless to say I have a huge scrape on my thigh, with a matching bruise, pedal marks on each leg, a gouge from a cactus needle in my leg, a bruise and scrape down my arm, a couple of bruises on my knees, etc etc. You get it. Also, I don’t think any of us could move the next day. So sore! Haha, we had about a ten mile ride back in, which wouldn’t be too bad (since I’m used to road biking), but I wish I had the padded butt pants!
I could have given up after the first trail and headed back with one of the guys who decided to go back on the main road, but I decided to stick with it and go on the second trail. I had a lot of fun, and I’m really glad that I tried something new. I think from now on whenever I have a new experience present itself to me, I will do my best to take the opportunity and try something new. Even though I found out that mountain biking is not exactly something I’m super good at and maybe not my very favorite thing to do at least I tried and I got out and did something new. I had a ton of fun with my friends, and I would have been so mad if I had just headed back or sat in the motorhome because it was not very good weather. Also, I love Moab. I really hope I get to go back when it’s better weather so that I can try more new things there!
Previous Post Next Post