My day in the OR

May 3, 2011
So today I went and watched my uncle preform a couple surgeries, so that I could see how I liked it and if it is something that I really want to do, etc. Ummm I loved it. I thought it was so cool. Of course I’m obsessed with Grey’s Anatomy and grew up watching ER with my mom, but I figured it would probably be a little different when the blood was oozing in front of my face and there was actually a body open in front of me on a table. It’s not really all doctors falling in love and drama, however that’s not necessarily everything I love about the shows. I did learn however, there are some similarities 🙂 So here are some things that I learned today which in the operating room: 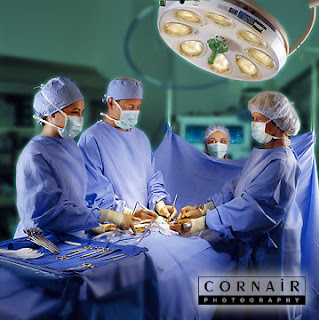 1. Doctors are slightly ruthless with the human body. Yes, they use precision when cutting or using their instruments, but today I watch them cut a woman’s abdomen open and in order to move her stomach muscles apart they literally were pulling at them from each side like they were ripping open a christmas present. I was a little shocked. Wonder how long it takes that to heal.
2. Some women have the weirdest va-jay-jays. And some women do NOT groom. (my uncle is an obstetrician. I probably should have mentioned that.)
3. I am slightly proud of myself. First time in an operating room and I was not the least bit queasy. I think I may have found the correct profession. Cross your fingers that I actually get into school.
4. If your doctor pulls a mass the size of a cantaloup out your body, you probably waited to long to go see a doctor.
5. If you are already 40, have a mass the size of a cantaloup on your uterus, a giant cyst on your ovary, and endometriosis sites inside of your uterus you probably won’t be able to have children. That woman has a lot of faith.
6. Doctors actually have the funniest conversations during surgery. They make jokes, they talk about their life, and sometimes they’re even inappropriate…maybe Grey’s Anatomy isn’t that far off sometimes.
7. I love watching people come out of anesthesia. Need a laugh?
8. I really hope I don’t have to get surgery anytime soon because, the patient just looks so helpless and vulnerable sitting there on the table right after you are put out. It would be hard to just trust that when you wake up everything is going to be ok. Plus, you’re just laying there naked…so awkward. As a spectator, it honestly wasn’t that weird, but I’m glad I wasn’t the patient.
9. Surgery tools still look freaking primitive to me. Minus all the computer stuff and lapriscopes etc, the regular stuff just looks like it was made in the middle ages. Some of it is a little creepy.
10. Surprisingly, when they first cut into someone there is not that much blood. However, when you accidentally cut into a cyst, there is a lot of goo. I don’t recommend it.
Previous Post Next Post

Sitting at the Dock