April 22, 2011
From Cosmopolitan Magazine
April 2011
This was an interview with Olivia Wilde, but she wrote this part herself and I really liked it so I just decided to repost it. So if you ever have a boyfriend or husband who complains about why you buy shoes or spend so much time getting ready tell him to read this! Haha, but I actually really like that she says, it doesn’t matter about the shoes, etc, because you are the same with or without them, but if they help remind you to be the best version of yourself then use them! I hope you guys all enjoy this! I can totally relate. 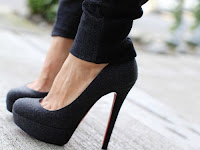 “On a recent glorious day in New York City, I was standing outside my apartment building feeling pretty fantastic when a 75-year-old lady with purple bifocals, a matching muumuu, Einstein’s perm, and sensible white sneakers stopped me, grabbed my hand, and said in a Brooklyn accent only Gilda Radner could mimic perfectly, “Oh! Those heels! Your feet must be dying! Who are you wearing them for? Dress for you. don’t worry about what anyone else thinks.”
I guffawed like she was just the most adorable and hilarious stranger to ever offer advice. My 3-inch Sergio Rossi ankle booties are an undeniable win. But really, who was I wearing them for? I suppose I wear them because I believe myself incomplete, disproportionate, and squat with them. I’ve always been convinced that my legs were stunted somehow (my sister is 6 feet 2), and on a day when I need to feel my best, a few inches’ boost from a pair of deadly stilettos is my way of correcting nature and fixing the injustice of my torso-to-femur ratio. But now I wondered if this attachment to the physical was somehow terribly unenlightened of me. Was I yanking the evolution of female sexual empowerment back to the age of foot binding?
I gave it some thought and replied to the woman, “They make me feel powerful.”
We are at our sexiest when we feel the most confident. We are at our least attractive when we are sure of our inadequacies and practically cave in on ourself to conceal them. No matter how incredible your lover swears you look, there is no way you’re getting hot and bothered when you feel fatter than the manatee they found in the Hudson River. We all handicap ourselves with insecurity, and it’s up to us to reset the self-worth scale and alter the message we send out into the world.
Hollywood. There’s nothing like the spotlight to bring out the quivering little insecure self you thought you ditched in high school. But you don’t have to be an actress to endure negative attention. Thanks to the Internet, there now exist forums for the public to declare their locker-room judgements without the risk of getting busted. I’ve been declared too fat and too skinny on the same day from the same photo. “Ew. She is disgusting and fat. Can anyone say thunder thighs?!” And the next post: “Eat something, Skeletor. You’re gross!”
It is pathetic to even have to read these things, but before you learn the hard way, it is nearly impossible not to check out what’s scrawled about you on the bathroom walls. But if I let this nonsense creep into my psyche, I’ll be ruined by it and therefor about as sexually empowered as a deflated blow-up doll.
So how do we remind ourselves of our fabulousness without letting our self-doubt or the criticism of other drag us down? Triggers. We wear heels. We get waxed. We do thing that make us attractive to ourself and, therefore, able to allow other to do the same. And they work- the girl who suggests skinny dipping after dinner is usually the one with the fresh bikini wax. Confidence is a state of mind, but sometimes we need to give ourselves permission to realize it.
Of course, the goal is to go beyond the physical, to find a way to make peace with out own inner high school mean girl for good. But on some days we need a little magic.
Laughing makes us happy. It’s possible that the same fake-it-til-you-make-it philosophy goes for conjuring up confidence. There is nothing wrong with embracing the tools that allow us to get there – heels, bikini waxes, whatever – as long as we’re aware of the fact that we are worth the same with or without these tools.
I think that woman on the street was an apparition, a projection of my subconscious, warning me of the danger of superficiality: She was right to make me question my masochist footwear, as they were painful enough for my to promptly kick them aside upon entering my apartment, but she missed the mark on my motive. I was wearing them for me. They were my confidence trigger as I left the house and headed out into the world, and if that’s what it takes to remind myself to put the sass back in my strut and be the best version of me, then so be it.
– Olivia Wilde

All I Ask Of You- Phantom of the Opera