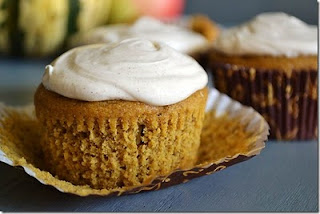 1. Preheat the oven to 350 and line two cupcake pans with paper liners.

2. In a small microwave-safe bowl, microwave the apple pieces on high about 1 minute or until tender. Set aside.

3. In a large mixing bowl, combine the cake mix, cinnamon, nutmeg, clove, pumpkin and water, then beat with an electric mixer on high speed 2 minutes. Fold in the cooked apple pieces.

4. Spoon the batter into prepared cupcake pan. Bake the cupcakes about 18 to 20 minutes or until inserted toothpick comes out clean.

So You Think You Can Dance – The Girls