May 8, 2011
You know how I love to post about celebrities and fashion. I finally got another big night to post about! It’s been a little while! There were a lot of different looks for this night so it was kind of more fun. It was a little hard to spread it out between likes, worst, and best. I almost just wanted to do what I liked and didn’t like, but I went with what I normally do! Tell me what you think!
Jennifer Lopez
I didn’t really like this. Fashion Police was in love with it. I love how she has been looking lately on American Idol, etc, but I think the little shrug/whatever thing was too much or something. I don’t know. I just didn’t love it. Red is great on her though.

Emma Stone
I loved this. I think she has been picking the cutest things this year. She looks so good in it too. Fits her so well. It’s a little bit of a random print, but I really like it.

Iman
Absolutely love. How many people other than her could pull this off? Maybe Heidi Klum. But if you can, then do it! She looks amazing. And you all know how I love sequins and gold. She’s gorgeous.

Kate Hudson
I thought she looked pretty. Not fabulous, but good. Her and Jessica Alba (see below) who are both pregnant, looked so similar though which I thought was kind of weird. They both wore the same color.

Kristen Stewart
I think she looks better than she usually does at big events, but she always wears the same kind of thing. I thought she looked pretty though.

Fergie and Josh
They look good together and the dress is pretty. Also I liked that she didn’t do something crazy and weird for this event, but I still don’t think it’s my favorite thing ever. It almost reminds me of like a wedding dress almost or something. 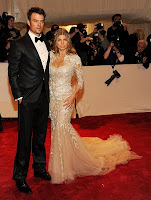 Jay-Z and Beyonce
Not my favorite. For either of them. I think I would like it if it didn’t go all the way up her neck.

Blake Lively
This was one that I could not decide about. I think she looks so pretty overall. I still like her hair better blonde though. Not a huge fan of the red she put in it. I really like the top of the dress. I don’t know how I feel about the goddess wrap part. She makes everything look good though. 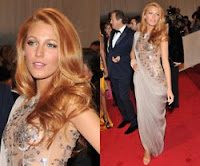 Rihanna
I feel like she has been struggling this year. Every dress she has worn this year is a see-throughish one. And her hair is out of control. This dress is actually way better than her other ones this year. The lace is so pretty. Down below on the second picture the train down the side is gorgeous, but I don’t like the other side where it looks like it is straight skin. I don’t know if you can really see it. But I just hate her hair. 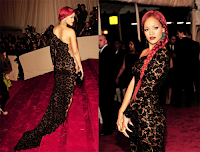 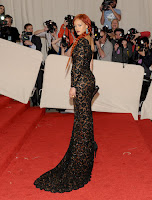 Worsts
Madonna
I sometimes wish she would just realize she is old. lol. Actually this dress isn’t bad in that department, but I think it’s not pretty. I don’t like the weird stars on it and I don’t love the material. At least she is covered. That’s why it is on my worsts, but it’s not the most terrible.

Michelle Williams
I hate to put her on this list, and actually the dress isn’t horrible, but why would you wear something so casual and plain to the Met Gala? That’s why she is on this list.

Christina Rici
She looks like she’s doing Casper, the sequel! It looks like a spiderweb or something. It’s too much. It could be kind of cool, but it’s just not really working.

Miranda Kerr
O Miranda, I usually love you. But this is just a little weird to me. It looks like you’re in a ballet costume!

Serena Williams
Barf. #1 That hat is terrible. You’re not at the royal wedding, and that hat would be a disgrace there anyway. #2 As Kelly said on Fashion Police, is this big birds wedding? #3 You just made yourself look bigger than you already are..
So bad all the way around.
My worst for the night. 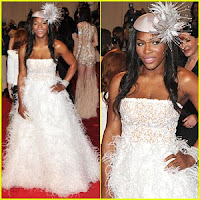 Bests
Jessica Alba
This is the dress that looks similar to Kate Husdon’s. You sort of have to put them next to each other, but Jessica’s was so much cuter. I liked the material a lot better and she just looks cuter overall. Such a cute prego dress. I think this color just looks better on her.

Sarah Jessica Parker
I just love this dress on her. I think it makes her look really good and it fits perfectly. I really like that way she did her hair with the dress too. 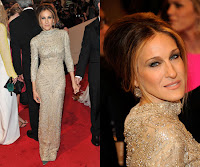 Giesle
I don’t have anything to say. The picture speaks for itself. She’s Gisele and she looks amazing. 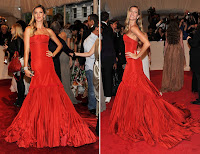 Taylor Swift
I really liked this dress. It’s totally different than what she normally wears and I loved the color. I would totally wear this dress if I had something fun to go to.